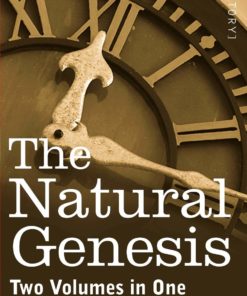 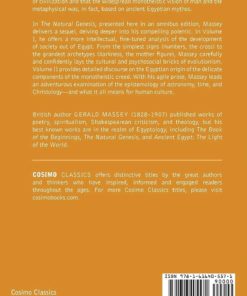 The Natural Genesis (Two Volumes in One)

Egyptologist Gerald Massey challenged readers in A Book of the Beginnings to consider the argument that Egypt was the birthplace of civilization and that the widespread monotheistic vision of man and the metaphysical was, in fact, based on ancient Egyptian mythos. In The Natural Genesis, presented here in an omnibus edition, Massey delivers a sequel, delving deeper into his compelling polemic. In Volume I, he offers a more intellectual, fine-tuned analysis of the development of society out of Egypt. From the simplest signs (numbers, the cross) to the grandest archetypes (darkness, the mother figure), Massey carefully and confidently lays the cultural and psychosocial bricks of evolutionism. Volume II provides detailed discourse on the Egyptian origin of the delicate components of the monotheistic creed. With his agile prose, Massey leads an adventurous examination of the epistemology of astronomy, time, and Christology-and what it all means for human culture.

The Natural Genesis is based on Massey’s study of hieroglyphic inscriptions, bone-caves, and cuneiform tablets of ancient Egypt. The findings from Massey’s years of dedicated research are carefully documented here and encompass such broad areas as religion and the occult, etomology, astrology, and mythology, as well as exploring such fascinating topics as Christian religious symbolism and the origins of verbal communication. As Massey unravels the mysteries of our ancient origins he moves us closer to understanding our contemporary existence.

British author GERALD MASSEY (1828-1907) published works of poetry, spiritualism, Shakespearean criticism, and theology, but his best known works are in the realm of Egyptology, including The Book of the Beginnings, The Natural Genesis, and Ancient Egypt: The Light of the World.

reader
5.0 out of 5 stars The books of Gerald Massey

Reviewed in the United States on January 3, 2007

This along with his *A Book of Beginnings* and *Ancient Egypt: The Light of the World* constitute a major work that took Massey most of three decades to write. There is nothing so important as these books in demonstrating the origin of all the world’s languages and cultures in the birth place of Egypt in Central Africa. Massey was the 9th Chosen Chief of what is known as the Order of Bards, Ovates and Druids in Britain between 1880 and 1906. And it was during these years that he was working on these volumes. He was an evolutionist, a consumate scholar, philologist, and great savant. These books are filled with the most amazing insights. A Book of Beginnings scientifically demonstrates the origins of the British Druidic and ancient Hebrew traditions in the ancient Egyptian. It also delves into the most ancient levels of the Egyptian in the lake region of Central East Africa at the source of the Nile. These books are not for casual reading. They are fraught with detail and demand careful reading. They cast a bright light on the great world tree of cultures and languages whose tap root is in Central Africa. Massey traces the development of Egypt so far back that it makes the past two thousand years look like it was just the other day. For anyone trying to understand the origins of the great African cultures, the British culture, the Jewish culture, Christianity, Hinduism, Buddhism, and all other cultures as well as all of the world’s languages, these books are to be regarded as a gold mine. For anyone studying the great Bardic tradition, these books belong among those that are to be considered indespensible. Massey is a major figure. All of his work is published by BCP (Black Classics Press).
the-consultant
5.0 out of 5 stars The beggining of CLARITY!! You must pass this way.

Gerald Massey is ‘the’ most under read “seer”/researcher dealing with history, religion, typology,… I mean what doesn’t he deal with directly or indirectly?
If you are trying to find the reason or essense of cultural/religious/societal practices then this two volume set is a must. Massey does for History & Understanding what Athur Young does for science (The Reflexive Universe), he makes the developement of Kemit accessible and understandable.
The writings of Gerald Massey will probably be the most dense material you have read in your life! Sometimes what he covers in one page another author would have taken 10. The book is the 2nd of 3 main books (6vols) and in my opinion should be read first! I read “Light of the World” first and understood it (I thought). When I read Natural Genesis and reread the others…they all opened up and revealed way more insight.
Lastly, I think for the establishment of the time Massey would presently be akin to a (more radical) Noam Chomsky, Gore Vidal, Howard Zinn…along the religio-socio-historical side. Hope that helps some.

Gerald Massey’s work has become essential for readers seeking a balanced understanding of human origins, religious thought and belief, and the role of Africa in world history. A native of England, Gerald Massey (1828-1907) was poet, Shakespearean scholar, mythographer, and radical Egyptologist who maintained that Africa was the source of “the greatest civilization of the world.” According to Massey, “all evidence cries aloud its proclamation that Africa was the birthplace of the nonarticulate and Egypt the mouthpiece of articulate men.

A Case for the American People: The United States v. Donald J. Trump

Where the Crawdads Sing

Unhinged: An Insider’s Account of the Trump White House