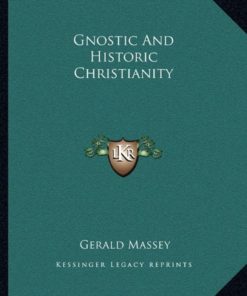 My purpose in the present lectures is to enforce with further evidence, and sustain with ampler detail, the
interpretation of facts, which has been already outlined in the “Natural Genesis.” My contention is, that
the original mythos and gnosis of Christianity were primarily derived from Egypt on various lines of
descent, Hebrew, Persian, and Greek, Alexandrian, Essenian, and Nazarene, and that these converged
in Rome, where the History was manufactured mainly from the identifiable matter of the Mythos recorded
in the ancient Books of Wisdom, illustrated by Gnostic Art, and orally preserved amongst the secrets of
the Mysteries.

My standpoint had not previously been taken. It was not until this, the Era of Excavation, that we were
able to dig down far enough to recover the fundamental facts that were most essential for the Student of
Survivals and development to know anything certain concerning the remoter origins and evolution of the
Christian System; the most ancient evidences having been neglected until now.
Instead of the Roman Church being a crucible for purging the truth from the dross of error, to give it forth
pure gold, we shall have to look upon it rather as the melting-pot, in which the beautiful and noble mental
coinage of Greece and Egypt was fused down and made featureless, to be run into another mould,
stamped with a newer name, and reissued under a later date.

In the course of establishing Apostolic Christianity upon historical foundations, there was such a reversal
of cause and outcome that the substance and the shadow had to change places, and the husk and
kernel lost their natural relationship and value. All that was first in time and in originality has been put
latest, in order that the prophecy might be fulfilled, and the last become first. All that preceded Christianity
in the religion of knowledge, of the Gnostics, has come to be looked back upon as if it were like that
representation in the German play where Adam is seen crossing the stage in the act of going to be
created!

Historic Christianity has gathered in the crops that were not of its kind, but were garnered from the seed
already in the soil. Whosoever tilled and sowed, it has assumed the credit, and been permitted to reap
the harvest, as undisputed master of the field. It claimed, and was gradually allowed, to be the source of
almost every true word and perfect work that was previously extant; and these were assigned to a
personal Christ as the veritable Author and Finisher of the Faith. Every good thing was re-dated, rewarranted, declared, and guaranteed to be the blessed result of Historic Christianity, as established by
Jesus and his personal disciples. It can be demonstrated that Christianity pre-existed without the
Personal Christ, that it was continued by Christians who entirely rejected the historical character in the

second century, and that the supposed historic portraiture in the Canonical Gospels was extant as
mythical and mystical before the Gospels themselves existed. In short, the mythical theory can be proved
by recovering the Mythos and the Gnosis.

This scarce antiquarian book is a facsimile reprint of the original. Due to its age, it may contain imperfections such as marks, notations, marginalia and flawed pages. Because we believe this work is culturally important, we have made it available as part of our commitment for protecting, preserving, and promoting the world’s literature in affordable, high quality, modern editions that are true to the original work.

Be the first to review “Gnostic And Historic Christianity” Cancel reply

King Of The Streets 2

A Case for the American People: The United States v. Donald J. Trump

Didn’t See That Coming: Putting Life Back Together When Your World Falls Apart

Stamped from the Beginning: The Definitive History of Racist Ideas in America (National Book Award Winner)

Holy Fable Volume 2: The Gospels and Acts Undistorted by Faith